This week, going up and down to and from Governors Bay we were treated with amazing sunsets as a result of the ash in the sky. The view from the Sign of the Kiwi parking over the Canterbury Plains was amazing on both the Monday and Tuesday afternoon, also the sort of magical landscapes earlier in the morning around the bays, with sun slowly showing made for some awesome views.

Earlier that morning the combination of mist, low sun and cold made for some almost magical views and I guess it reminded me that to a large extent making a special picture is all about being there in the right place at the right time. 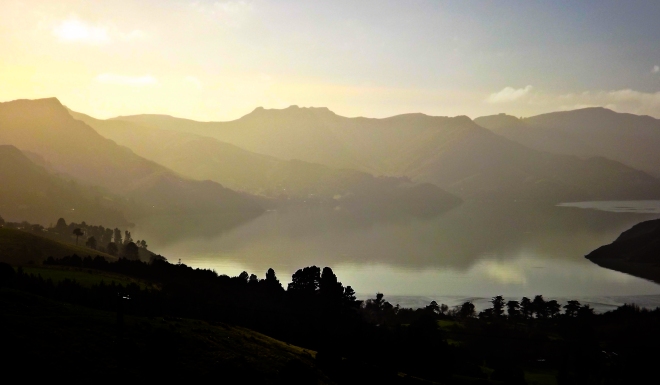 Most spectacular however were the ash filled skies over the mountains during sunset. Christchurch, although hit by another severe aftershock looked beautiful, impressive and alive.

Now one does not need much talent to shoot a picture like this, and I bet that with a mobile phone the result would have been equally beautiful. It had nothing to do with me and all with being in the right place at the right time.

The next day I was prepared and decided to go and be there at the same time. The sky was not as impressive, but patience and seeing how the light was changing rapidly made a difference. And seeing the light change from

On the way back later that evening I stopped one more time at the same place and saw the city below like this.

A strange sense of peace came over me. Christchurch may be shaken, stirred, hit hard, damaged, ravaged and whatever negative qualifications one could think of, at the same time the sea of lights below me indicated that Christchurch is also very much alive, and a city with a bright future. If a city can shine like this after a massive aftershock than imagine what it’ll be like after restoration. Enough reason for me in any event to stick around.